Boaters – be diligent about Clean-Drain-Dry and watercraft inspection! 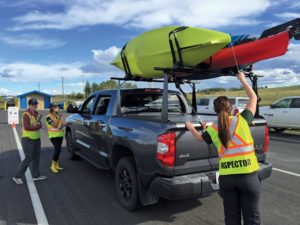 Boating season is here! With the arrival of warm weather and the cautious re-opening of activities, many of us are now thinking about boating, paddling, and fishing.

For the Columbia Shuswap Invasive Species Society (CSISS), boating season means it’s time to turn up the heat on invasive Zebra and Quagga mussel prevention. The increased movement of boats and other watercraft into the region means there’s an increased risk of an accidental introduction of the invasive mussels.

Zebra and Quagga mussels – two species of small, freshwater mussels that originate in Europe – have incredible destructive potential. The mussels occur in parts of eastern and central Canada, but fortunately they have not invaded British Columbia or our nearest neighbour, Alberta.

“Zebra and quagga mussels create enormous problems in lakes because they cling to and form colonies on objects under water: boats, dock pilings, water supply and irrigation systems – anything. This imposes costly, nuisance maintenance.  It’s impossible to get rid of them once they are established in a waterbody,” says Robyn Hooper, Executive Director of the Columbia Shuswap Invasive Species Society.

That’s not all. “The mussels will litter beaches with their razor sharp shells. They produce foul odours, and they pollute water quality which puts the lake ecosystem and drinking water at risk,” adds Hooper.

“Boat and watercraft owners have an important part to play in preventing the spread of invasive mussels,” Hooper says. This is because the primary way invasive mussels invade new waterbodies is by ‘hitch hiking’ on boats, fishing gear, and other watercraft including canoes and paddleboards. Adult mussels are small, about 1 centimeter in diameter, and may be attached to watercraft inside compartments or other hard-to-spot areas. Juvenile mussels are free-swimming and microscopic – impossible to detect with the human eye.

“At this time, we don’t really know what the tourism season might look like, in terms of the number of people travelling here with a watercraft,” says Hooper. “Even so, we are treating this very seriously. Watercraft from outside of BC could potentially be infested with invasive mussels. It could take just one infested watercraft launching into a BC waterway to start a new population of invasive mussels here.”

There are two prevention measures that boat and watercraft owners need to follow, Hooper explains. “The first measure is to clean, drain, and dry your watercraft every time you move it out of a lake or waterbody. By doing this, you’re greatly eliminating the chance that you’re moving invasive species.”

“The second prevention measure is to stop at watercraft inspection stations in your travels,” Hooper adds.

There are several watercraft inspection stations set up at entry-points to BC staffed by the Conservation Officer service. “All travellers with watercraft are must stop. Watercraft will be inspected and, if necessary, decontaminated free of charge.”

Watercraft inspection isn’t required for travellers within BC. However, residents can help raise awareness for the importance of inspection. “We encourage residents to talk to their out-of-province family and friends that plan to travel to BC with their watercraft,” adds Hooper. “The more people that know about invasive mussels and watercraft inspection, the less vulnerable we are to an infestation.”

Any suspected transport or possession of zebra and quagga mussels should be reported to the Provincial RAPP line at 1-877-952-7277. For more information about bringing a boat into BC, visit the provincial website https://www2.gov.bc.ca/gov/content/invasive-mussels/bringing-your-boat-to-bc. For more information on zebra and quagga mussels, visit CSISS’s website at w https://columbiashuswapinvasives.org/resources-for-boaters/. 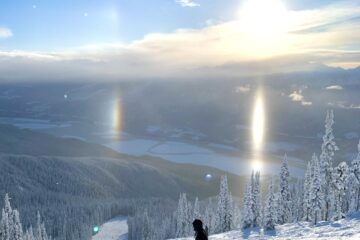