CURRENTLY KNOWN IN: Across eastern Canada, from Québec to Manitoba; Widespread across the U.S., as far west as North Dakota, South Dakota, Utah, Nevada and California

Zebra (Dreissena polymorpha) and quagga (Dreissena rostriformus bugensis) mussels, also known as Dreissenid mussels, are two of the most widespread invasive species that have notoriously transformed freshwater ecosystems across North America. Neither are currently known to be found in B.C. but their introduction would certainly have negative environmental, economic and social welfare impacts.

NOTE: Zebra and quagga mussels are two different species and their distributions differ across North America. Some areas which had previously been infested with zebra mussels are now dominant with quagga mussels. They also have some biological and ecological differences, however, their environmental and economic impacts are similarly negative and profound. Due to their earlier introduction and greater distribution, there are more studies and information available on zebra mussels in North America.

Zebra mussels are named for the striped pattern of their shells, however, the appearance of these stripes vary widely. The coloration patterns of quagga mussels also vary among individuals and across regions. Zebra and quagga mussels appear similar but they can be differentiated by their shell morphology: zebra mussel shells are generally more triangular with a pointed hinge, and also have a flat underside. They are both small in size, between 2.5-5 cm, and are only found in freshwater. 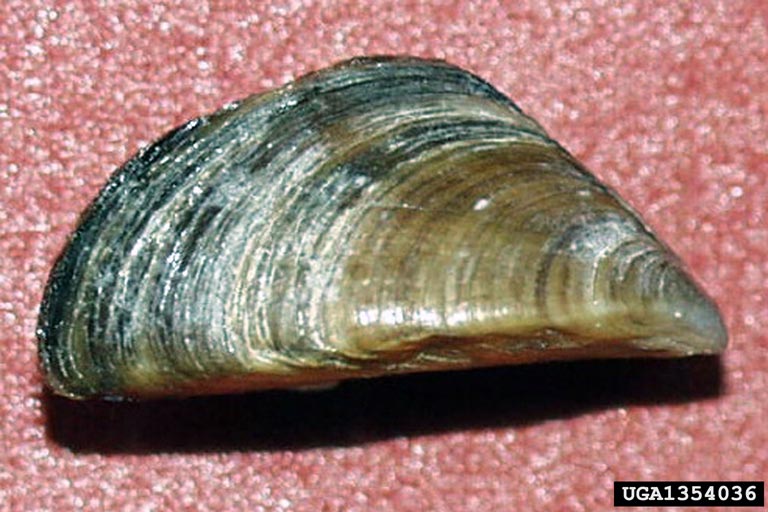 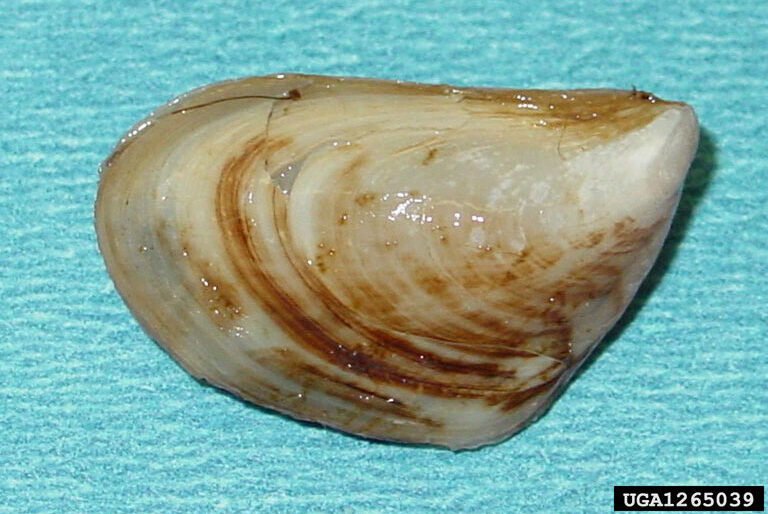 An adult female zebra mussel can produce up to one million eggs each year. In North America, quagga mussels have been documented to begin spawning at water temperatures of ≥ 9°C; spawning by zebra mussels will start when temperatures are closer to 12°C. Spawning periods can last longer in waters that remain warm for an extended period.

After the eggs are fertilized, free-swimming veligers (larvae) will develop and can persist for up to one month in the water column. Veligers transition to juveniles when they settle on a substrate and use their “foot” to find a suitable place for attachment. Zebra and quagga mussels prefer hard or rocky substrates and they use byssal threads to attach securely to the substrate. Zebra mussels live for 4-7 years on average.

Zebra and quagga mussels are filter feeders; they have very efficient filtration rates and feed primarily on planktonic algae. Zebra mussels are capable of filtering one litre of water per day.

In their native range, mussel veligers may be consumed by zooplankton (e.g. copepods) and larval/juvenile fish. Adult mussels are preyed upon by some fish (e.g. roach, drums), crayfish and waterfowl. Waterfowl are the most common predators of invasive mussels in Canada as there are few native fish that have the jaw and teeth morphology required to crush mollusk shells.

Zebra and quagga mussels are native to the Black, Caspian and Azov Seas in Europe. Zebra mussels were first detected in the North America in the 1980s. It is suspected that larval mussels were present in the ballast water of a commercial cargo ship that traveled from the Black Sea to the Great Lakes. Since its introduction, zebra mussels have rapidly spread across the connected waterways in the Great Lakes region.

Today, zebra and quagga mussels are still transported to new areas from infested waters. In some cases, attached adults act as “hitchhikers” on boats or trailers. However, mussel veligers are capable of surviving transport in residual water left in boat cavities such as ballast tanks, live wells and sterndrive engines, and this is another vector of spread to consider.

Environmental: They have the ability to alter freshwater food webs by consuming phytoplankton, which in turn can cause shifts in the abundance of zooplankton populations. By filtering phytoplankton from the water, water clarity can increase, which in turn allows aquatic plants to proliferate; the overgrowth of aquatic plants changes the type and function of habitat available to other species. Invasive mussels can avoid consuming blue-green algae (cyanobacteria) and discarding it as pseudofeces; this selective type of consumption can cause a phytoplankton community to become cyanobacteria-dominant, increasing the likelihood that an algal bloom, should it develop, be toxic. 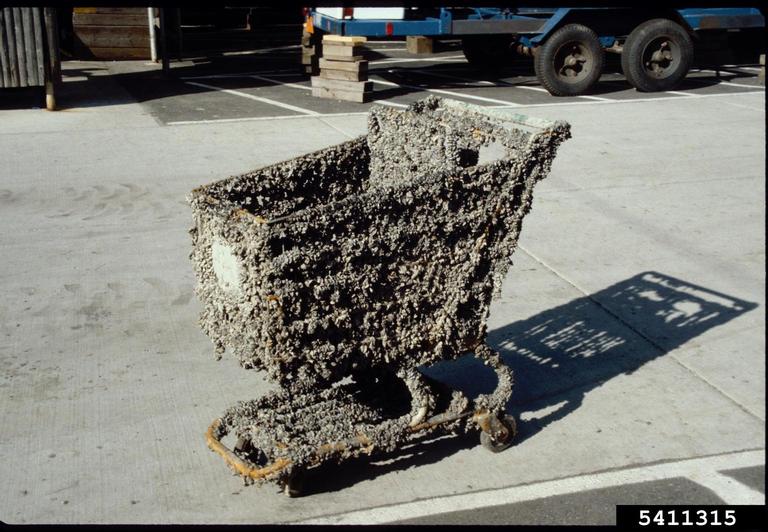 Economic: Zebra and quagga mussels are well-known for their biofouling properties. Due to their ability to attach well to hard surfaces, they can grow on and clog infrastructure associated with hydro electrical dams, water treatment plant intake/output pipes and navigational buoys, just to name a few. It is estimated that the cost to manage invasive mussels in the Okanagan region of B.C. alone will be at least $42 million per year. Biofouling also impacts recreation and tourism, where marinas, docks, mooring buoys and watercraft. The high growth of shells (and their subsequent die-off) is also detrimental to property values.

Social: While biofouling by zebra and quagga mussels impacts recreation and tourism-associated infrastructure, these impacts are also felt by residents and visitors alike. When the mussels die-off, the shells pile onto beaches. They are razor sharp and foul-smelling, which is very unpleasant and unsafe for beachgoers. In general, the cumulative negative impacts by zebra and quagga mussels takes away from the beauty and enjoyment of lake environments.

What Can We Do? 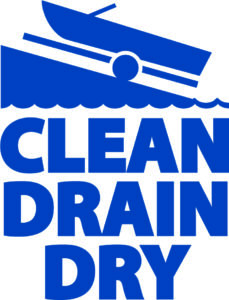 CLEAN DRAIN DRY: Clean off all plant parts, animals and mud from watercraft and equipment (e.g. boat trailers, paddles, fishing gear, waders and boots). Drain onto land all compartments and accessories that can hold water (e.g. bilge, ballast, live wells, buckets) and remove plugs before traveling. Dry the watercraft and equipment before launching into another body of water.

INSPECTION: When travelling into B.C., all watercraft must be inspection and Watercraft Inspection and Decontamination stations. To learn more about what is required when bringing a boat to B.C. visit the Province of B.C.’s Invasive Mussel Website.

REPORT: Report all sightings of invasive species online or on the ReportInvasives mobile app.

Self, J., & Larratt, H. (2013). Limiting the spread of aquatic invasive species into the Okanagan. Prepared for the Okanagan Basin Water Board and the Glenmore-Ellison Improvement District.