Zebra and Quagga mussels – not known in BC

Zebra and Quagga mussels are two species of freshwater shellfish that are not yet known in BC.  If accidentally imported they could damage our aquatic environment, our economy, and our enjoyment of our waterways.  Prevent the spread of these species by always stopping at inspection stations when bringing any watercraft to BC.  Click to watch the Mussel Threat video. For more information see the BC Government Invasive Mussel site. 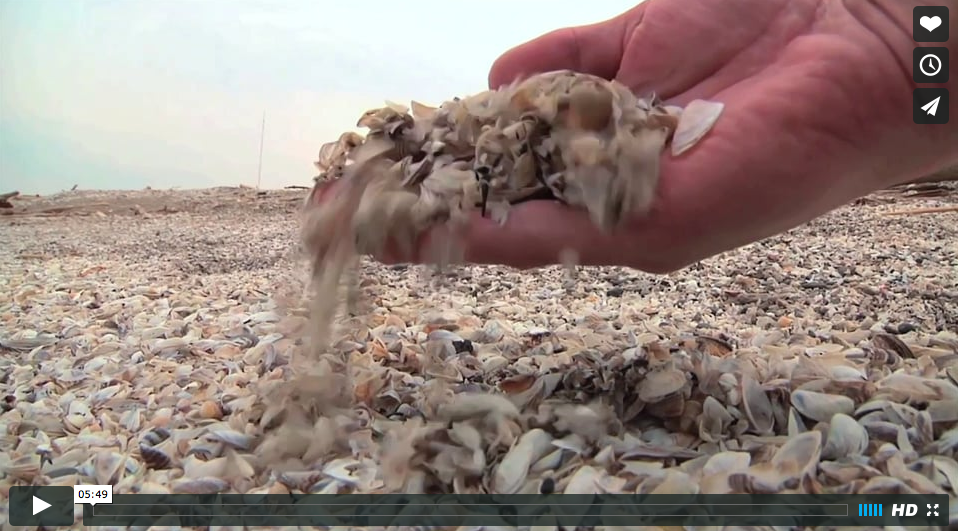 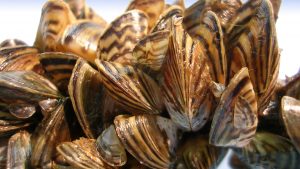 Corbicula fluminea are small invasive freshwater clams with a triangular shell.  They are found in silty to sandy to gravel substrates in shallow areas of lakes or rivers.   C. fluminea can self fertilize and reproduce rapidly, with a single clam producing up to 70,000 eggs/year.  C. fluminea can spread by human transport and water currents and have been sold for aquarium use.

Recent surveys have found invasive clams in the Salmon Arm of the Shuswap Lake.

Substrate surveys detected live clams at Sunnybrae and Canoe. Beach walking surveys found shells at Sandy Point but have not found clams at any locations outside the Salmon Arm of the lake.  The surveys were conducted by the Columbia Shuswap Invasive Species Society with funding from the Shuswap Watershed Council, direction from the Ministry of Environment and Climate Change Strategy, and assistance from the Invasive Species Council of BC Job Creation Program.

So what can be done?  Unfortunately, once established, eradication of Corbicula fluminea clams from a complex, connected water body is very unlikely and management methods are limited.  Impacts to the system are difficult to predict and depend on several factors. The best thing you can do is prevent further spread to other lakes or rivers.  Clean, Drain and Dry your gear and watercraft, and never release live animals or plants into waterways. Extent surveys are still under way and CSISS will continue to post updates as we learn more. 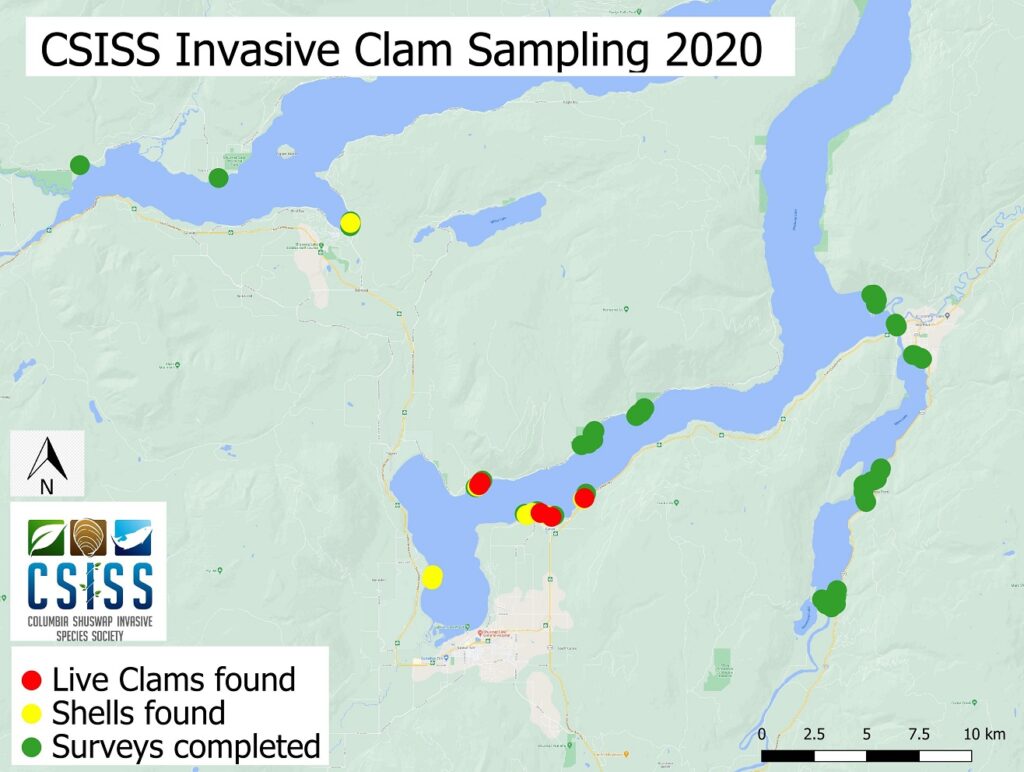 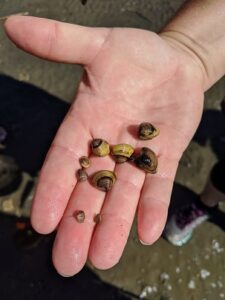 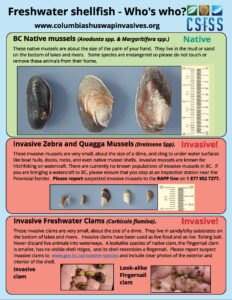 Clean, Drain and Dry all watercraft, fishing gear, and water toys before moving from one water body to another or from the Salmon Arm to another part of the Shuswap Lake. 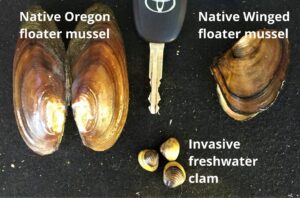 There are several species of native mussels in the Columbia Shuswap region.  Adult native mussels are much larger and more elongate than the small triangular adult clams. Click to download our printable Who’s Who Freshwater Shellfish poster.

Many, but not all C. fluminea clams are hermaphrodites and can self fertilize.  They brood their young in their branchial water tubes and release them into the water column when they are almost fully formed.  The juveniles have mucilaginous byssal threads which they can use to cling to the sediment, vegetation or hard surfaces.  Turbulent water movement can dislodge them and cause them to float to new locations (Sousa et al. 2008) 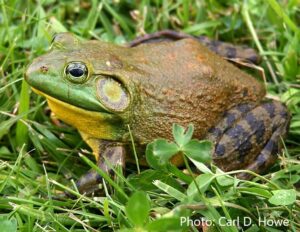 American Bullfrogs are native to eastern North America.  They were brought to BC as farm animals last century, farmed their meaty legs and some were released to form wild populations.

Bullfrogs are large, smooth skinned, typically greenish with a lighter belly (sometimes yellow).  They have a very large circular eardrum behind their eye with a skinfold following the rounded shape.  They do not have parallel ridges running the length of their back.

Bullfrogs are not known to exist within the Columbia Shuswap Region.  Please report any occurrences.  These large frogs are generalist predators and eat other frogs, reptiles, small fish, baby birds, and even small mammals. Biodiversity plummets in many waterways where bullfrogs are established.  Never release captive animals.

Learn to identify American bullfrogs with the Frog Identification key.  Male bullfrogs have a very distinctive call during the summer breeding season, June – July.  If you hear this sound, please report.

Whirling Disease – not known in CSRD 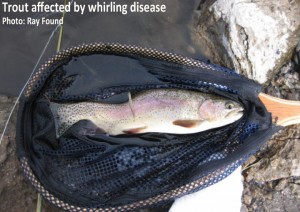 Whirling disease affects all salmonid fishes, including salmon and trout.  It has the potential to decimate these fish species and can be accidentally transmitted through the movement of fish (alive or dead), water, mud or plant matter.   Whirling disease has been found in the Bow River watershed and may be present on other waterbodies.

Common in some CSRD lakes 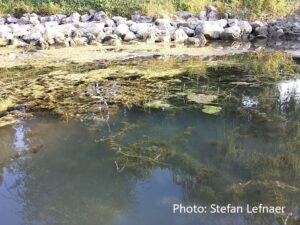 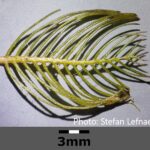 As with most invasive plants, once milfoil establishes, it is almost impossible to eradicate. Prevention is the best method to stop its spread, remember to Clean, Drain, Dry your boat! 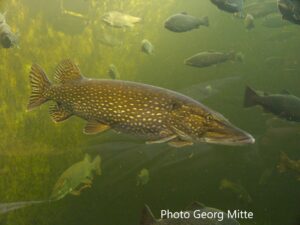 Northern pike are native to northeast BC and are common throughout Quebec, Ontario, the Prairie provinces and northern territories. They have been introduced into the lower reaches of the Columbia River but are not known to be established above the Hugh Keenleyside dam at Castlegar.
Northern pike is a predator of smaller fish and is fiercely territorial. Northern pike has been known to deplete prey species from waterways, pushing out local large fish and collapsing food webs.
Please be aware of the fishing regulations around invasive fish in BC.  See page 4 of the BC Freshwater Fishing Regulations Synopsis
Report any occurrences of this species. If accidentally caught, please photograph, note location, date and time, then release.
IT IS ILLEGAL TO POSSESS LIVE FISH OR RELEASE LIVE FISH INTO B.C.’S LAKES OR STREAMS

In some CSRD waterways 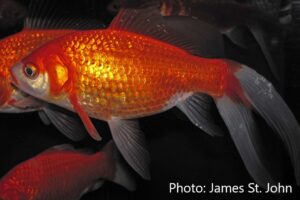 Goldfish are a common invasive species in BC, often resulting from the illegal release of pets.  In the wild goldfish can grow surprisingly large, and breed fast.  They can survive low oxygen levels and are tolerant of a wide range in temperatures.  They are omnivorous and feed on insects, crustaceans, vegetation and smaller fish.  Goldfish feeding activities typically lead to muddy waters, damaging habitat for native species. 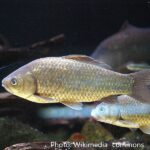 Not all goldfish are gold!  Some are drab olive green, white, or splotched.

Goldfish are currently found in several lakes in the Columbia Shuswap region, including the Salmon Arm of the Shuswap Lake, White Lake, Lost Lake (near Scotch Creek), Canoe Pond, and Deep Creek Pond (near Enderby). 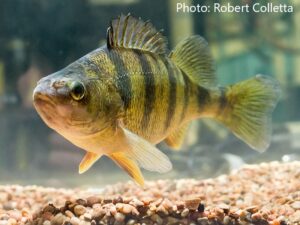 In some CSRD waterways

Yellow perch are native East of the Rocky Mountains, from Alberta to Nova Scotia and North to the Northwest Territories.

Yellow perch reach sizes of around 25cm (10″) are predatory on small fish, tadpoles and insects.  They reproduce quickly and can out-compete native species.
Illegally or intentionally introduced to some regions of BC as sport fish, they have typically become extremely numerous which lead to them not reaching more than about 10cm in length.

This species is known to occur in the Upper Arrow Lake, Williamson Lake, Pinaus Lake, Little Pinaus Lake, Square Lake,  and Cedar Creek.  Some lakes in our region have been successfully treated with Rotenone to remove this species – Gardom Lake, Skimikin Lake, Larch Lake, Larch Pond, Nellies Lake.
Please be aware of the fishing regulations around invasive fish in BC.  See page 4 of the BC Freshwater Fishing Regulations Synopsis
Report any occurrences of this species. If accidentally caught, please photograph, note location, date and time, then release.
IT IS ILLEGAL TO POSSESS LIVE FISH OR RELEASE LIVE FISH INTO B.C.’S LAKES OR STREAMS 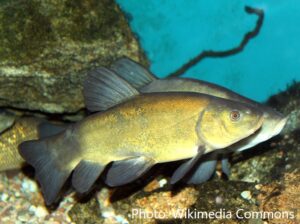 Not known in the CSRD

Native to Europe and Asia, tench prefer slow moving vegetated waterways and are able to survive low temperatures so are well adapted to living in BC.  Tench are a stout fish, up 20 – 84cm long, with a dark upper surface fading to golden belly, and orange eyes.  They have distinctive barbels (fleshy whiskers) on either side of their mouth. They have rounds fins, except the tail fin, which is flat.  Some tench have been bred as pond fish and can be golden with red or black splotches. Tench are omnivorous and create turbid conditions during their feeding activity which reduces sunlight and makes them a threat to many indigenous aquatic plants.  They also outcompete indigenous species for food.

Known to be established in Skaha, Osoyoos and Okanagan lakes.

Please be aware of the fishing regulations around invasive fish in BC.  See page 4 of the BC Freshwater Fishing Regulations Synopsis
Report any occurrences of this species. If accidentally caught, please photograph, note location, date and time, then release.
IT IS ILLEGAL TO POSSESS LIVE FISH OR RELEASE LIVE FISH INTO B.C.’S LAKES OR STREAMS 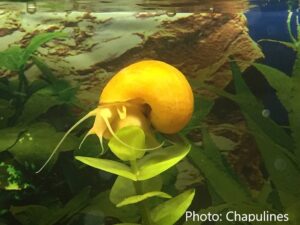 Several species in the Ampullariidae family are known as Apple Snails.  Apple snails have been sold in pet and aquarium stores due to their decorative shells, and ability to clean surfaces of algae buildup. 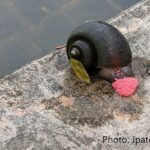 When introduced to non-native areas, they can rapidly alter the aquatic ecosystems due to their aggressive feeding style and rapid growth rate. They are voracious and opportunistic, feeding omnivorous aquatic vegetation and other snail species.  Apple snails are also amphibious and can survive seasonally in both terrestrial and aquatic environments.  Distinguishing features of apple snails are a round shell, feeding tentacles near their mouth, and a breathing tube (siphon) that they use to breath while staying submerged.  They also lay bright pink eggs.
Is your snail and Apple Snail?
Prevention is key.  Do not purchase this species.  Never release aquarium animals, plants or even aquarium water into waterways. 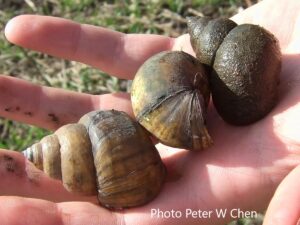 Chinese mystery snails have been sold in the pet and aquarium trade.  They are a large species, which is able to out-compete native species and can reproduce rapidly to very high densities.  They are able to retract into their shells, closing a shell door and thus survive out of water for up to four weeks.  They have a very large, cone-shaped shell, up to 6.5 cm tall with 6-7 whorls. Juvenile snails are light brown while adults range from olive green to ruddy brown. 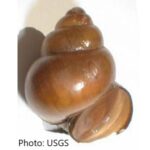 Although known to infest some waterbodies on southern Vancouver Island, they are unknown from mainland BC.

Prevention is key.   Do not purchase this species.  Never release aquarium animals, plants or even aquarium water into waterways.

Common in many parts of the CSRD 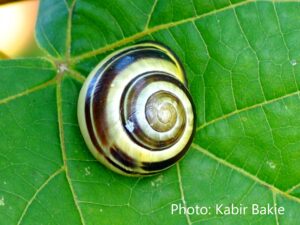 The banded or brown-lipped snail is a terrestrial invasive snail, native to Europe.  The name comes not from the stripes around the shell, but from the brown band around the shell opening.   Snails of this species can vary significantly in colour from red, to yellow or white, with or without stripes.  Typically, these snails preferentially feed on detritus. . 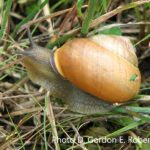 Do not transport this species.  Ensure plant pots and garden furniture are free of snails before transport.

Where are the Aquatic Invasive Species?